Scooter is Talkin’ Turkey for Thanksgiving! Florida’s Own Osceola Turkey! 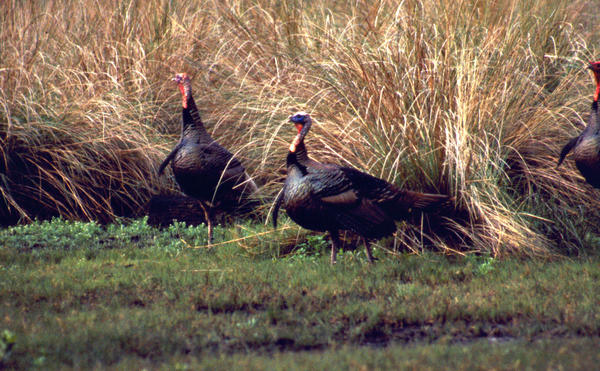 Put down the knives and forks, folks. We’re not giving out recipes on how best to prepare these Florida favorite wild birds for our Thanksgiving tables. We are, however, going to take a look at their history and learn why they are far more than just a seasonal menu item.

Named after the great Indian Chief, Osceola by Naturalist W.E.D Scott in 1890, Scott’s observations of this particular bird noted that, unlike the eastern wild turkeys, the Osceola (also called the Florida Wild Turkey) held a more iridescent sheen with less brown or bronze shading. It’s size was also noticeably different. Smaller and slightly darker than its eastern counterparts, Scott surmised that this bird’s stature and coloring were well-suited for Florida’s pine woods, marshes and flat scrub areas where they reside.

Exclusive only to Florida, the Osceola turkey courtship begins with the males’ resonance of loud, shrilling gobble sounds. When a female nears, they strut, lifting and flapping their wings in an obvious display. Females, slightly lighter in color with deeper wing colors, will choose a male they consider appropriate to the cause – so to speak, and crouch or huddle beneath him in a signal that the courtship may continue.

A few weeks after the mating, hens seek nesting sites in which to lay their eggs. An interesting side note to the egg-laying behaviors of wild turkeys, they will continue, even  as egg laying occurs, to feed, socialize and even mate with other wild turkeys during nesting. Although they do so well away from the actual nesting site, this is another interesting aspect of these beautiful wild birds.

Scooter’s slightly horrified. Vinny just wants to know where the party’s at.

Within a 2 week period Osceola Turkey hens will typically lay between 10 and 12 eggs. She will then incubate for nearly a month, rolling the eggs every hour and leaving the nest only for short periods of time. As the chicks, or ‘poults’, begin the hatching process, the hen responds with soft, muted clucks. These sounds act as an imprint mechanism; a vital part in keeping young Osceolas safe as they eventually follow their mother throughout Florida’s wooded areas.

The mother hen, in typical fashion, will lead her babies by calling to them in short clucks, the same as they heard upon hatching. One call, an alert to danger, will be slightly different from the hen’s usual leading cluck. When used, babies will freeze in place, crouching down as low to the ground as possible or, if near, will run to the mother hen as she covers them with her wings.

The Osceola Wild Turkey is a favorite among Florida’s wild bird watchers. Due to its home ranges, and the isolation of the marshes, and the shrub or woodland areas in which they most often are found, seeing a true Osceola is an exciting thing.

Wild Birds Unlimited in Clearwater/Safety Harbor wishes you and your family a happy and safe Thanksgiving Day!